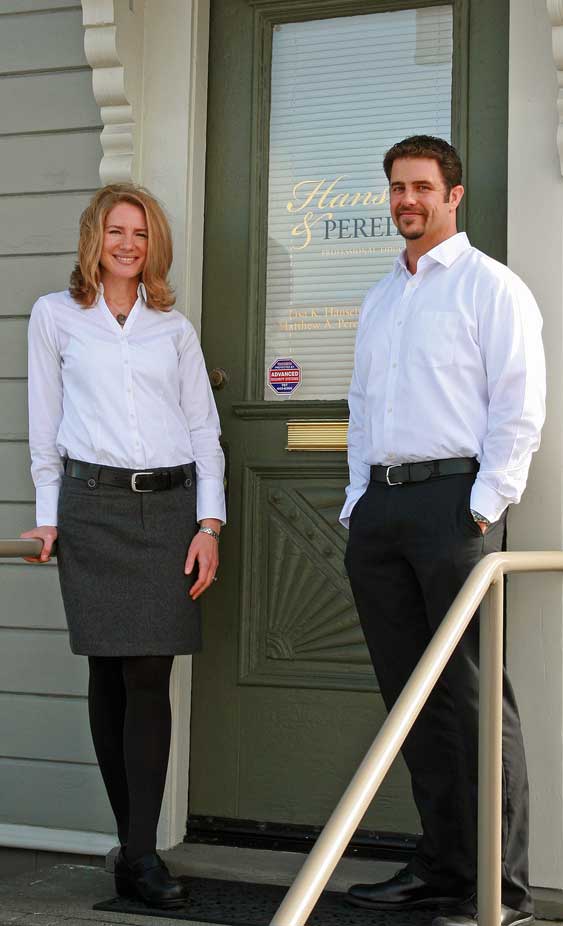 Hansen & Pereira began in 2008 as “Lisa K. Hansen, ElderCare Financial Services”. Lisa, a fifth-generation Humboldt County native from a long line of local professionals and entrepreneurs, was motivated to jump ship from the corporate world to launch the business after a personal experience involving her grandparents opened her eyes to the financial vulnerability of the elderly demographic of our population. Lisa has an educational and professional background in accounting, tax, business, and risk management. Shortly after starting the eldercare financial services business, Lisa met with a group of supportive local fiduciaries who encouraged her to consider becoming a fiduciary. Although Lisa had previously met the requirements to sit for the CPA exam and thereby become a fiduciary for financial matters, after much consideration, she chose instead to pursue the state’s then new professional fiduciary licensing in order to have access to a wider spectrum of professional mentors and continuing professional education programs in both financial and health care fiduciary matters.

Although not a requirement for fiduciary licensing, in 2009 Lisa completed the California State University, Fullerton post-baccalaureate fiduciary management certificate programs for both trustees and conservators, and shortly thereafter passed the state and national licensing exams to become a California Licensed Professional Fiduciary and National Certified Guardian. After becoming licensed, Lisa went to work part-time for a local accounting firm as a fiduciary accountant and fiduciary tax return preparer, while also operating her fiduciary business from home part-time. In 2011, due to her growing fiduciary case load, Lisa left the employment of the accounting firm to focus full-time on her own business, moving the business from the home office to a commercial office space in Eureka.

In 2011, Lisa’s husband, Matthew A. Pereira, a Bay Area native, HSU Business Department alum, and former investment adviser-turned-corporate financial analyst, motivated by Lisa’s passion for her profession, decided to enroll in the introductory fiduciary management course at CSUF for a formal taste of the fiduciary profession. Matt was immediately intrigued by the course and both Lisa and Matt recognized the value that Matt’s professional expertise could bring to the business. In 2012, after also completing both CSUF fiduciary management certification programs for trustees and conservators, Matt joined the business as a “fiduciary intern”. He became licensed as a California Licensed Professional Fiduciary and National Certified Guardian in 2013, and officially joined the firm as an owner shortly thereafter to become (much to his surprise) a third-generation entrepreneur. And in case you’re wondering how to pronounce Matt’s last name, you’re not alone – it’s “Per-AIR-ah”.

Lisa and Matt live in nearby Bayside with their two children and a small barnyard of largely rescued four-legged dependents. When not on the clock or spending time with the kids, Lisa can be found in the barn or pasture working with the animals, or wielding a power tool of some sort. Matt can be spotted with his nose in the latest gourmet cookbook, in the kitchen seasoning his cast iron skillet collection, or out in the garden. Both Matt and Lisa are avid health nuts, and as former athletes, both have volunteered as coaches for local youth sports organizations and have also served as classroom volunteers for their children’s school.